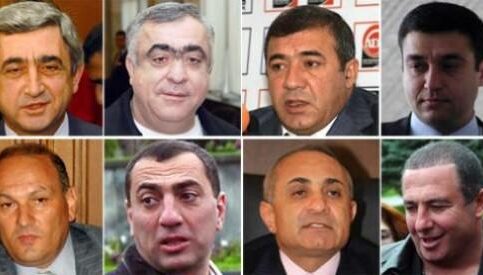 Taking into consideration the fact that the function of the Information Disputes Council is to develop and publish expert opinions of advisory nature about disputes involving defamation and insult, on its own initiative the Council has studied and published its professional conclusion on the article published on 14.10.2010 in N188 (2623) issue of “Haykakan Jamanak” (“Armenian Times”) daily with the headline “Seven out of Eight are in the List”, accompanied with photos of eight people, including Members of the Armenian National Assembly Ruben Hayrapetyan, Levon Sargsyan, and Samvel Aleksanyan.

On 08.11.2010 the abovementioned Armenian MPs turned to the First Instance Courts of General Jurisdiction of the Center and Nork-Marash administrative districts of Yerevan. On 07.02.2011 the court passed a verdict, obliging “Dareskizb” LLC to retract the information that was considered to be damaging the reputation and dignity of claimant R. Hayrapetyan, L. Sargsyan and S. Aleksanyan, and which was published in the center of the front page of the 14.10.2010 N188 (2623) issue of “Haykakan Zhamanak” daily. Also, the refutation had to be published in “Haykakan Zhamanak” daily under a heading “Refutation” and within one week after the verdict’s entry into legal force. The verdict also anticipated that “Dareskizb” LLC pays AMD 2,044,000 (two million forty four thousand) fine to each of the abovementioned MPs, where AMD 2,000,000 (two million) was the compensation fine, and AMD 44,000 (forty four thousand) was the amount of prepaid state fees. “Haykakan Zhamanak” daily appealed the verdict, however, the Armenian Court of Appeal denied the appeal. The verdict of the Court of Appeal was appealed in the Court of Cassation, and the Armenian Court of Cassation returned the appeal.

Evaluating the disputed article and the court verdicts, in the context of the Armenian Constitution, Case Law of Article 10 of the European Convention on Human Rights and of the European Court of Human Rights, the Information Disputes Council concluded that at present it is a widespread principle for cases of defamation and insult to provide extra protection for media outlets and journalists in some cases even when untrue and slandering announcements have been made. This principle is expressed with a number of protective concepts, which are: fair comment, reasonable publication, restatement of others’ statements.

The European Court reiterates that:

“Punishing a journalist for assisting in the dissemination of statements made by another person would seriously hamper the contribution of the press to the discussion of matters of public interest and should not be envisaged unless there were particularly strong reasons for doing so.”

The Information Disputes Council finds that based on the experience of the European Court, it is necessary to discuss whether the media outlet had reasonable means to check the source of information, its reliability, the facts, whether the journalist conducted necessary investigations, whether the information was disseminated in a balanced way, and whether the defamed individuals were given a reasonable opportunity to protect themselves. After publishing the article the media outlet disclosed its source, by publishing in the 02.11.2010 issue of “Haykakan Zhamanak” daily a voluminous interview with the individual (source of information) who had provided the relevant information to the media outlet. Here the source did accept the fact that it had provided the information and also stated other details regarding the abovementioned publication. It is worth noticing, that the media outlet had disclosed its source already in the pre-court stage, sending a letter to the claimants.

As for the criterion whether the article was disseminated in a balanced way, the author of the article has avoided using the expression “participation” in crimes, which would suggest a direct accusation of the abovementioned officials for committing those crimes.

The Council believes that the courts did not use the abovementioned criteria in passing their verdicts. Moreover, the court procedure was carried out so that the representative of the media outlet was not given the chance to present his facts and documents in order to use the abovementioned protection. All of these caused unbalanced interference in the media outlet’s freedom of expression.

The Council believes that such a court conclusion has a rather limiting nature.

On the other hand, as a minimum condition, it is required that the journalist sufficiently separates him/herself from the context of slandering or insulting statements. The concept of “sufficiently” is determined within the circumstances of each case, particularly, whether the journalist or the media outlet, in the framework of the relevant circumstances, made the least efforts to check the correctness of the information. Although each case is unique with its factual circumstances, in all cases the reader has to get an impression that the statement does not belong to the media outlet, but is the reproduction of the statement of a journalistic source, hence, avoiding misleading the reader.

As for the established compensation fee, the Council finds that the AMD 6,000,000 (six million) demanded by the claimants obviously does not correspond to the proportionality and necessary intervention principle, because the media outlet appears under a rather unproportionally heavy financial burden that endangers the media outlet’s smooth operation, which is in no ways related to the claimants’ fair compensation claims. In cases of proportional intervention, according to the approach of the European Court of Human Rights (ECHR), when defining the amount of compensation the inter-state courts must take into consideration the limited means of those, against whom cases of slander or insult are charged. The judicial limitations, doubtlessly, have put the accused media outlet in unequal conditions in comparison with the claimants.

Thus, the Information Disputes Council announces, that in light of the above-mentioned principles, analyses and standards, the courts have made an unproportional interference in the media outlet’s freedom of expression.