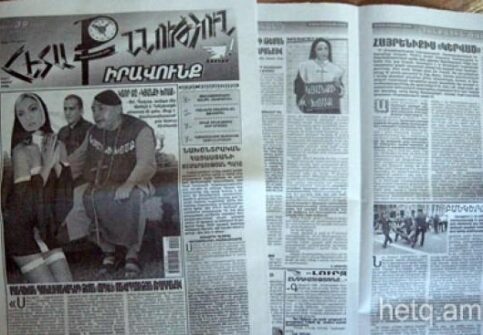 The IDC Opinion on the Lawsuit Filed by the Religious Organization "Word of Life" and the Head of Organization Arthur Simonyan vs. "Iravunk Hetaqnnutyun" (Law and Investigation) and Argumenti Nedeli v Armenii" Periodicals

The attorney of the Religious Organization “Word of Life” Church of Evangelical Christians of Armenia has applied to the Information Disputes Council, requesting to provide opinion on the lawsuit filed by the organization on 18.11.2011 against “Iravunk Hetaqnnutyun” and “Argumenti Nedelii v Armenii” weeklies. Examining the case, the Information Disputes Council publishes its professional opinion.

In addition, the religious organization has deemed insulting and defamatory the photos edited through a computer programme, which, in the opinion of the claimants, create the impression that the members of the organization resort to the same behaviour as attributed to the woman in the photographs disseminated by the media – actress Angela Sargsyan.

The Religious Organization “Word of Life” and its Head Arthur Simonyan have submitted a lawsuit against “Iravunk Hetaqnnutyun” and “Argumenti Nedelii v Armenii” periodicals, requesting that the court obliges the media to publicly apologize and publish the court verdict on the grounds of insult; to publish refutation on the grounds of defamation and to charge 36000 AMD from the respondents as a compensation – 4000 AMD as a state duty and 32 000 AMD for translation and notary related expenses incurred.

The Information Disputes Council finds that the dispute under discussion touches upon the media’s right to free expression from the one side and the public right to the freedom of thought, conscience and belief, on the other.

The word “sect” with its usual, daily applicable connotation can disturb, shock and in this sense be deemed as unacceptable for some religious groups. However, this circumstance is still not sufficient to claim that the media have circumvented the permissible limits of criticism, in accordance with today’s democratic principles. Essential here is the context in which the word “sect” has been used. In this sense the Council finds that while the word “sect” itself does not contain a derogatory meaning, its continuous and accentuated use in light of the general context of the two articles is problematic.

The Council finds that when expressing their assessments, opinions and judgments about the religious organization and the ideas it advocates, the media did not have factual data but based on just one factual data, i.e. a third party statement, with a number of generic and abstract conclusions and judgments stemming from this statement. And when factual circumstances are missing, the legal position of the Constitutional Court comes to the forefront stating that when factual data are absent, the intention to harm dignity becomes evident. The presence of this criterion is essential for deeming a statement as insulting and defamatory.

The Council has assessed as well the photos accompanying the articles. Although as caricatures they are considered as a way of free expression and are under the protection of free speech, however the absence of factual data in the substantial part of articles makes meaningless the provocative depiction of the organization’s attributes and its leader. As a result, such way of caricature presentation could insult the religious feelings of the members of the religious organization.

The Council finds that the general context of the article and the continuous and persistent use of the word “sect” therein transforms the information item into a speech cultivating or inciting religious hatred.

The Council finds as well that the facts of the case utterly provide with an opportunity to resolve the case through extra-judiciary means and calls on the parties to use this opportunity.