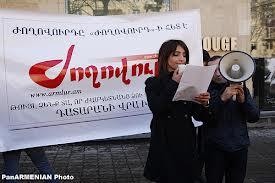 The “Yerevan Poultry Farming” OJSC and its Director Khachik Khachatryan have applied to the Court of General Jurisdiction of Kentron and Nork-Marash Administrative Districts of Yerevan vs. “Zhoghovurd Newspaper’s Editorial House” Ltd. and journalist Sona Grigoryan, in connection with the article entitled “The famous oligarch fined for selling expired eggs” published in “Zhoghovurd” newspaper on 11.12.12. The Plaintiffs find that this article harms the honour and dignity of Khachik Khachatryan and the company’s business reputation. The Plaintiffs have requested the court to oblige publishing refutation, as well as to charge the Respondents 3 mln. AMD for insult and defamation. In the preparatory phase of the court trial, a motion has been submitted concerning application of measures to secure the claim, according to which it was requested to ban the assets or financial means of the Respondent in the amount of 3 mln drams, as well as to ban the respondent media outlet’s coverage of the issue under court hearing or the subsequent course of the court dispute, be it in the respondent newspaper or any other media. On 10/01/2013 the Court made a verdict about the motion, in which, part of the motion demanding ban on assets was satisfied. However the court rejected parts of the motion demanding a ban on financial means, as well as banning coverage of the issue under court hearing and subsequent developments of the court dispute. The court has substantiated its verdict in the following manner:

Coverage by the Respondents of the issue under the court’s consideration, including the further process of the court hearing until the end of the court trial in Zhoghovurd” daily or in other mass media can not in any manner make the implementation of the upcoming court verdict on the present civil tort impossible or challenging, thus the court finds that the Plaintiff’s motion….is subject to rejection since the mentioned parts of the motion do not stem…from the essence of securing the implementation of the claim and expediency of its application”.

Court’s application of a kind of measure to secure a claim that impacts the media’s possibility to seek and disseminate information is deemed as an interference to the right to freedom of receiving and disseminating information and ideas as enshrined in Article 10 of the European Convention on Human Rights and in this respect the relevant media outlet can consider itself as a victim of interference into this right . In this particular case the motion requested several measures for securing the claim: a ban on the assets of the Respondents, ban on the financial means of the Respondents, ban on the coverage of the legal dispute in the respondent media or any other media and ban on the coverage of the court trial. Amongst the requested four measures the court has satisfied the measure which will not impact the possibility of the media to disseminate information. Indeed, if the ban on financial means would seriously endanger the media outlet’s work and the ban on providing information on the process of court hearing would directly limit freedom of expression, the ban on the assets of the media outlet will not always intervene with the normal operation the media. It goes without saying that the decision on putting a ban on the company’s assets is an interference with property rights , since as a result the Respondent loses the possibility to alienate the property (to sell, exchange, donate).

However, in such circumstances, the owner of a property continues maintaining the constitutional right and capacity to freely use and own property, which excludes any legal basis for any state body to confiscate or withdraw assets. Such level and method of interference in property rights does not limit media’s freedoms to an extent that its freedom to disseminate information and thus also public right to receive information would be endangered.

As long as the court’s verdict does not touch upon these important rights of the media on the one hand and of the public on the other, the court’s verdict can not be interpreted as interference to the right to free expression, moreover as a violation of this right. In this context the Council also finds that under specific circumstances putting a ban on the assets of a media outlet can create chilling effect on the free flow of information.