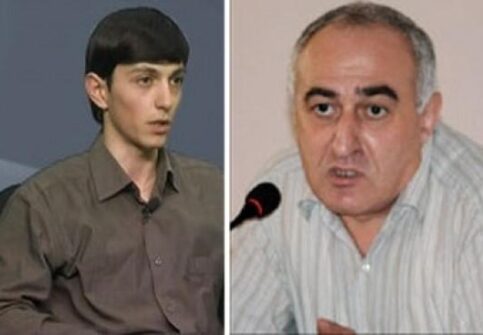 On 22 October 2012, the respondent Sirak Yeghiazaryan took part in a Criminal Law exam to enter YSU’s Law Department’s Master’s Degree Programme but the exam results came unsatisfactory. On 28 May 2011 this case was discussed during a programme called “Akanates” (eye-witness) prepared by “Banadzev” and broadcast by H1 TV channel. During this programme the programme host Sirak Yeghiazaryan and the lawyer/expert made several statements, which, in the opinion of the plaintiffs, discredit the honour, dignity and business reputation of the YSU, its Law Department’s Criminal Law Chair, as well as of Ara Gabuzyan, professor, Doctor of Law, and were insulting and defamatory.

The plaintiffs YSU and Ara Gabuzyan have legally challenged the title of the relevant issue of “Akanates” programme – “The Lawbreaker Lawyer”, as well as a number of statements made during that programme.

On 11 June 2011, the YSU and Ara Gabuzyan have applied to court, demanding to oblige the respondents “Banadzev” and Sirekan Yeghiazaryan to the following:

to publicly, verbally apologize to the YSU and Ara Gabuzyan, Chairman of the Criminal Law Department, during “Akanates” programme, which will follow the court verdict’s entry into force, by also placing the video on the programme’s website and on the www.youtube.com. This claim however has changed, since “Akanates” is no longer broadcast on H1. The plaintiffs have thus requested the court to oblige the respondents to publicly apologize at another programme broadcast by H1;  to publish the court verdict on the first page of “Banadzev” website, in a visible location, as well as on http://akanates.banadzev.com website’s homepage and under 28.05.11 program pages, in a visible place, with the inclusion of the following note: “By the decision of Yerevan’s Kentron and Nork-Marash Administrative Districts’ Court of General Jurisdiction, “Banadzev” LTD and Sirak Yeghiazaryan have been obliged to  apologize to the Yerevan State University and YSU’s Criminal Law Chairman Ara Gabuzyan for the insult and defamation made during the prgoram “The Lawbreaker Lawyer”. The complete text of the court verdict is presented here”.

It should be noted that according to Artak Alexanyan, President of “Banadzev”, as per the requirements of the law on Mass Media, the text of refutation has been broadcast by the Armenian Public Television’s “Akanates” programme and the text’s paper version has been shown on the screen as well. The respondent assumes that the plaintiff has missed the programme containing refutation and this is why went to the court.

According to the plaintiff Ara Gabuzyan, an agreement had been reached regarding the day and time for broadcasting the refutation text but “Banadzev” did not publish the refutation at the agreed time and as a result very few persons could watch the program broadcasting the apology and the plaintiffs did not see this program. Thus the plaintiffs do not agree that the refutation was published properly. As claimed by Ara Gabuzyan, they would not have resorted to a court application if there was a proper refutation. Besides, the respondent did not appear in court and the case was heard without the presence of the respondent party.

When assessing facts, the Council takes into account that every member in a democratic society should have an opportunity to freely express his/her ideas pertaining to the fields that are important for the state and society, including on the events and phenomena in the education field, irrespective of the level of negativity of these ideas.

The Council takes into account that part 2 of Article 10 of the European Convention on Human Rights stipulates that in any case the necessity for interference into the media’s right to free expression should be assessed by taking into account whether or not there was an acute public demand for the interference and whether such interference is “necessary in a democratic society”.

The Council takes into account the media’s role in a democratic society and the media’s mission to keep in the center of the public attention all areas and phenomena that are of public importance and also considers that education is one of the most important areas of a state’s internal policy and has a public significance. The European Court of Human Rights has expressed its position with this regard in the case “Sunday Times vs the United Kingdom”  by noting that the media’s responsibilities are not limited to the mere presentation of facts but expand to the interpretation of facts and events, making the public aware of these and promoting the discussion of issues that are of public resonance.

The Council takes into account that along with the mentioned above, the ECHR notes that the media have the responsibility to impart information and ideas that are of public importance, although the media should not pass the limits set for the protection of other persons’ reputation.

The Council arrives to the following conclusion:

Considering the TV programme from the point of view of journalistic behavior, the Council finds that the principle of good-faith and responsible journalism which provides pluralistic and balanced information has been violated during the program. In particular, the strong criticism about professor Ara Gabuzyan has been voiced by using statements, views and opinions, which could have harmed the person’s honour and dignity. The information provided during programme was to be balanced, i.e. by ensuring that the positions and opinions of the YSU and Ara Gabuzyan about the subject under discussion were also presented, whereas the program organizers not only did not provide them with this opportunity but also did not undertake relevant measures to ensure such opportunity.  Before going to court a verbal agreement has been reached between the two parties about the day and time of publishing the refutation text, however the respondent party, violating the agreement, broadcast it on a different day.

The Council finds that the refutation does not meet the requirements defined in Article 8 of the RA Law on Mass Media, thus the party did not provide with an adequate opportunity for legal protection.

The plaintiffs did not demand any financial compensation.

The Information Disputes Council welcomes this approach when presenting court applications for defamation and insult related cases, irrespective of the court’s decision.