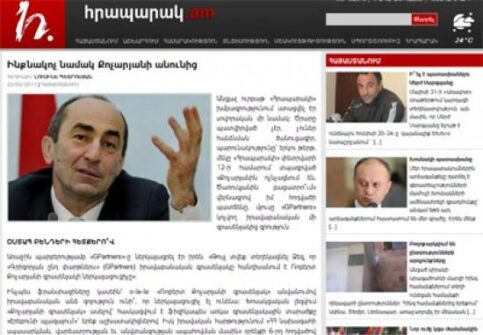 The IDC Opinion on the court case the RA Second President Robert Kocharyan vs. "Hraparak" Daily

Taking into consideration the fact that the function of the Information Disputes Council is to form and publish professional conclusions of advisory nature about disputes over slanders and insults, with its own initiative the Council studied the disputed articles published in 12.02.2011 #25(695), 22.02.2011 #31(671), 12.03.2011 #45(685) editions of “Hraparak” daily, and published its professional conclusion.

Evaluating the disputed articles and the expressions cited in the claim, in the context of the demands of case law of the ARM Constitution, article 10 of the European Convention on Human Rights and the European Court, the Information Disputes Council found that the articles published in “Hraparak” daily have to do with public interests, and the announcements that they contain are evaluating judgments and not factual data. Thus, we expect the Court to use much higher criteria when assessing the need to arbitrate freedom of expression.

Meanwhile, the Council finds some of the published evaluating judgments not to meet the standards of responsible and diligent journalism. The media outlet could have expressed the same ideas using other, less offensive expressions. Therefore, in such circumstances the need to arbitrate the freedom of expression will depend on the arguments that the answering media outlet will bring during the court hearing.