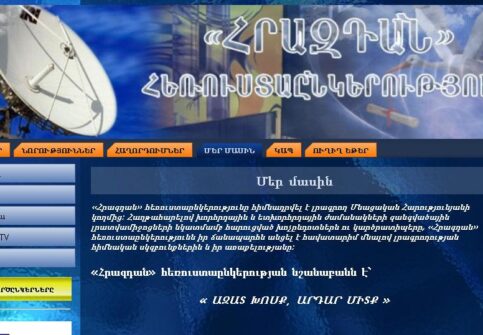 The IDC Opinion on the court case filed by Gagik Atasyan vs Mnatsakan Harutyunyan, Journalist, Director of “Hrazdan” TV Company

On December 5, 2012, the Information Disputes Council released its opinion on the court case filed by Gagik Atasyan vs Mnatsakan Harutyunyan, Journalist, Director of “Hrazdan” TV Company.

On 18/01/2012 an article entitled “Revelation: the real face of the “Citizen of the Year” authored by Mnatsakan Harutyunyan, was published in “Aravot” newspaper. In this article the author refuted a number of public statements made by Gagik Atasyan who claimed that he is a well-known figure in theatre and cinema, was able to fundraise 7 mln. USD for making a film on Karabakh conflict and that the film’s script is ready, that governmental bodies are aware of this and have promised to support this project’s realization. With his article Mnatsakan Harutyunyan was actually blaming Atasyan for lying and deceiving the public.

After “Aravot”’s publication, between January-March 2012 the websites of “Hraparak”; “168 Zham”; “Hetq” and “Mitq” dailies also came up with refutations of Atasyan’s statements, by publishing the respondent’s article with some comments .

On 29/05/2012 Gagik Atasyan applied to the First Instance Court of Kotayq Region vs Mnatsakanyan Harutyunyan, informing that in the aforesaid article the respondent has disseminated statements that defame and insult him and requested to oblige the respondent to publicly apologize and pay 3 mln. drams as a compensation for defamation and insult.

The court trial is currently ongoing. During court trial the respondent has submitted a counterclaim for some of the comments made by the Plaintiff in the website of “Aravot” daily, considering them as insulting and demanding to charge in favour of M. Harutyunyan 2 mln AMD and to compensate the paid state duty amount.

Judging from the volume and contents of information disseminated in the media in 2011-2012, including the discussions in the social media, the interview given by Atasyan generated high public interest. He touched upon topics of high public interest: a feature film on Karabakh problem being under preparation, refusal from the governmental side to support it, threats received from Azerbaijani sources, involvement of world renowned actors in the film, etc. In general, with his actions Gagik Atasyan strived to publicize his projects, thereby attracting public attention to his personality and actions. With this, the plaintiff has himself contributed that his personality becomes in the forefront of public attention and thus should expect as well wide scopes of criticism about him and his actions.

Here below the Council evaluates the disputed public statements:

In a large part of the article the author has collectively presented information disseminated by the media on the plaintiff, which was received from the plaintiff during interviews and press conferences. Thus, the journalist makes use of part 6 of Article 1087.1 of the Civil Code. In the second part of the article the author has asked questions and then expressed doubts about whether or not the information corresponded to reality. The reasons for such doubts was the comparison of information received from the media with the facts received as a result of his own investigation and with the facts that are well known in Hrazdan which is the residence of the plaintiff and of the respondent. Regarding the first, the author has properly mentioned his sources and as for the second, the facts are well known in the community and are not subject to being proved. Thus, this part of the article is presented with the observance of good-faith journalism. In the post scriptum part the author has criticized the Plaintiff by publicly accusing him for lying and keeping the public in deception for long time. The Council finds it appropriate to evaluate this part of the article under wider scopes, in the context of the entire article and all events surrounding it. The context is the plaintiff’s numerous public appearances in the period which preceded the article (about half a year), as well as the wave of wide discussions in various platforms, when different groups in the society were welcoming the plaintiff’s initiatives and expressing their support. On the background of these developments the Plaintiff has not presented any fact or justification that the information he provided to public corresponds to the reality. The acute criticism made in the article in the context of such developments stemmed from the behavior of the plaintiff, which is a circumstance protected under point 3 of part 5 of Article 1087.1, according to which a statement about facts shall not be deemed as defamation if it stems from a person’s public appearance or response or from a document on the latter.

The Council finds that the statements and value judgments about the facts in the article were made on sufficient factual basis. Thus, the author has acted in good faith and within the scope of professional requirements.