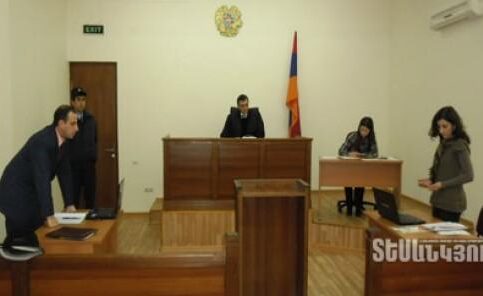 On 21.06.11 a video material titled “Where are the Destroyed Flagstones?” prepared by Ijevan TV company was broadcast by “Lraber” news programme of Armenian Second TV Channel. The video pertained to the renovation works of “Ijevan RCE” Closed Joint Stock Company in a number of streets of Ijevan. The video material criticized the Company for removing flagstones of the Ijevanyan street of Ijevan, without having the relevant permission and urban construction documents, which resulted in the street’s becoming impassable for people and public transportation. In particular the broadcast material included the following statements: “Real destroyers having one name – Ijevan Road Construction Enterprise, are disguised under a business mask”; “perhaps it is the lack of quality and fairness which caused such consequences”; “has destroyed and secretly sold the flagstones”; “were sold with the uncaring hand of Ijevan road construction company”; and “after heavy rains it is about how  36 million drams for Metaghagortsneri 36 street were spent and wasted that people would be talking about”.

On 27.06.2011 Ijevan TV company broadcast a video material entitled “The Flagstones in a Safe Destination”, where the Director and staff of “Ijevan RCE” CJSC provided clarifications about the earlier information.

The Company applied to Court on 19.07.2011 against Ijevan TV Company and journalist Naira Khachikyan who prepared the video material, demanding apology for damaging business reputation and a compensation of 3 000 000 AMD for pecuniary and non-pecuniary damage (including 200 000 for the fee paid to the lawyer and 64 000 AMD for state duty as a court expense) to be charged from the Respondents.

In its verdict from 27/04/2012 the Court arrived to the conclusion that the first 2 statements “Real destroyers having one name – Ijevan Road Construction Enterprise, are disguised under a business mask” and “perhaps it is the lack of quality and fairness which caused such consequences” are value judgments which can not be deemed as insulting. While the journalist went for exaggeration, with this style she expressed an opinion which is not injurious. By assessing the remaining expressions as statements about facts, the Court concluded that the expressions “has destroyed and secretly sold the flagstones”; “were sold with the uncaring hand of Ijevan road construction company” and “of 36 million drams’ spending and wasting” do not correspondent to the reality as factual data and damage the company’s business reputation. With this regard the Court defined that the video material damaged the plaintiff company’s business reputation. When determining the compensation amount the court concluded that the damage incurred by the plaintiff has been partially compensated by the fact that the latter one received a possibility to present its views during the programme broadcast by Ijevan TV company on 27.06.2011 and therefore decreased the compensation amount to 50 000 AMD.

When awarding a pecuniary compensation it is necessary that the Courts attach high attention to how the compensation amount is defined, demand financial documents submitted by plaintiffs to relevant state bodies and other documents….otherwise high compensation amounts can result in severe consequences in terms of the plaintiffs’ ability to continue their activities.

…In this particular case it is not clear under which circumstances the court has arrived to the conclusion that the compensation amount should be 50 000 AMD when the Second Armenian TV Channel has a nation-wide coverage, i.e. the damaging information voiced by a nation-wide TV company became available among all stakeholders who are in business relations with that company.

The information material entirely concerns a problem which is of high public interest. During court examination it is indeed necessary that the courts take into account the “watchdog” responsibility of the media in democratic society which enables citizens to scrutinize the activities of public bodies. When exercising this responsibility, the media have the right to present their subjective assessments, use acute criticism and exaggerated expression means. According to the Constitutional Court of the RoA this right of journalists is limited at a point when “it is no longer possible to argue that they are making their contribution to the open debate over issues that are important for the society”. This can be deemed as the distinction line which separates responsible journalism from non-responsible journalism.

In this particular case the media had an aim to invite public attention to the alleged breaches during construction works carried out with the community means and thereby generate open public debate. When doing this the journalist raised acute issues and went for exaggerated statements. All this was taken into account by First Instance and Appeal Courts with regard to the first and second statements in question. Such approach is indeed welcome.

A different attitude was shown to the remaining 3 statements, which the court deemed as statements of facts. The Council also finds that these are statements of facts that are subject to a different legal regulation, i.e. they are subject to being proved. This circumstance should oblige journalists to remain very vigilant. In such circumstances a statement will be referred to the person having publicly presented the factual data and ultimately this person will bear responsibility for proving the truthfulness of such statement.  Since it is the routine responsibility of a journalist to check facts, very serious circumstances must be in place in order for this responsibility to be lifted. The presence of such circumstances depends on the nature and level of the defamatory statement, way of its distribution  and to what extent the source of information was reliable for the medium at that moment . A relevant feature also is the presumption of innocence.

In this particular case the media outlet and the journalist have not provided any evidence for justifying the statements and just stated that the mentioned statements “are heard from people during video shooting”.

The Council finds that the statements in question were too serious and damaging in order for the underlying facts be justified just with such vague evidence. Thus no good-faith was exercised in checking the facts of the statement. In the same context the Council considers the circumstance that the statement was disseminated several times by the Second Armenian and “Yerkir Media” TV channels which have a nation-wide coverage. The distribution of information via such means is much wider from the point of view of its impact than via other types of media.

As far as the conclusion of the Court of Appeal that when determining the compensation amount the First Instance Court did not assess the circumstance that the information was distributed by a TV company which has a nation-wide coverage, as well as that the First Instance Court did not take into consideration the material situation of the respondents, the Council, in principle concurring with the approach of the Cassation Court, for now abstains from expressing an opinion since the court hearing over the mentioned two basis is still ongoing.

As for the respondent’s position that the second programme broadcast on 27.06.2011 can be deemed as a refutation by the respondent and thus the plaintiff should not have requested a court protection, the Council agrees with the Cassation Court’s approach that when reversing the First Instance Court’s decision, it instructed the First Instance Court to find out in the course of the new examination of the case, whether the plaintiff company, before seeking  court protection, requested the respondents to refute the published information in the same means as it was distributed. The Council finds that the clarification of this issue can have a crucial impact on the result of the outcome of the case.

The Council also appreciates the fact that the first instance court has notably reduced the amount of the monetary compensation defined against the media outlet with the justification that with the possibility of expressing their views during the second programme, the violated right of the plaintiffs was partially restored. It is also commendable that the reversing of the court decision by the Court of Appeal was based on the omission of the First Instance Court, according to which without demanding any evidence concerning the damage caused by the plaintiff, the Court, exclusively based on its inner conviction, defined the amount of the damage incurred by the plaintiff company. The Court has instructed to examine this circumstance as well in the course of the new examination of the case.