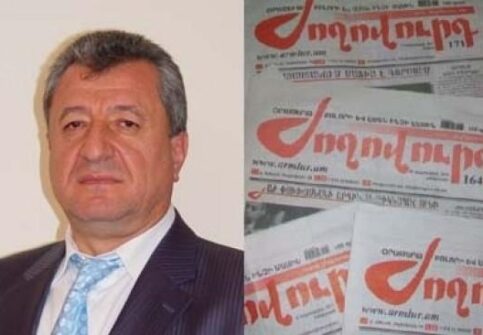 The IDC Opinion on the Court Case Filed by Nver Poghosyan vs. “Zhoghovurd Daily” Ltd.

On October 26, 2012, the Information Disputes Council released its conclusion on the Court Case Filed by Nver Poghosyan, Head of Regional Administration of Gegharqunik Region vs. “Zhoghovurd Daily” Ltd.

On 07.10.2011, an article entitled “The Marzpet has Taken Bribe” was published in the No. 17 issue of the Daily. The disputed part of the article mentions the following:

“Nver Poghosyan, the Marzpet of Gegharqunik Region has taken a bribe through his driver in the amount of 3 thousands US dollars in order to grant “victory” to a history teacher of Ttujur village school in a competition”, a competition participant Anna Torosyan told “Zhoghovurd” about this. It is a common knowledge that the cross-border Tchambarak region is one of the poorest settlements but it turns out that there are officials in our country, in particular those who build prosperous Armenia, who are not interested on how people find money to pay bribe. What matters for them is how this money is put in their pocket. Instead of creating conditions for the people to work in villages which are lacking teachers, they demand bribe. When “Zhoghovurd” newspaper asked the press secretary of the Prosperous Armenia Party Baghdasar Mheryan a question about this, the latter said that such thing could not have happened and if it did happen, the culprit will be punished. It appears that the Prosperous Armenia Party is not responsible for the actions of its Marzpet…”.

Going to court, the Plaintiff informed that the article contains factual public statements of defamatory nature. As a legal protection measure the Plaintiff demanded publishing refutation, charge the Respondent 2 million AMD as a compensation for defamation, and 500 000 AMD for judicial expenses – fee intended for the advocates’ remuneration, as well as the state duty amount paid in advance.

During court proceedings the Plaintiff mentioned that the article is the author’s fair reproduction of the statements made by teacher Anna Torosyan, that the journalist was implementing one’s professional duties and when publishing the interview the journalist presented a verbatim reproduction of the statements made both by A. Torosyan, who accused Marzpet Nver Poghosyan and the statements of the Marzpet. In such circumstances the media outlet cannot bear responsibility for reproducing information received from a disclosed source.

During court investigation A. Torosyan confirmed that she is the author of the statements disseminated by the media outlet. The court heard the recording of her statement. She also mentioned that she has submitted a refutation request to the newspaper and the latter published the refutation with relevant comments.

According to the materials of the case, based on the public statements made by A. Torosyan in “Zhoghovurd” newspaper, an investigation was launched with Tchambarak Police Department, as per Article 333 of the Criminal Code (False Crime Reporting) and Torosyan was interrogated. However, taking into account that the information published in the article did not correspondent to the reality and Torosyan refused providing a written statement with the Police Department, reasoning that her information does not have sufficient grounds, the police found that corpus delicti towards false crime reporting was missing in her action and decided to refuse filing of a criminal case, reasoning that there was no crime case concerning the Gegharqunik Marzpet and there was no corpus delicti as far as A. Torosyan was concerned.

Based on these facts, the First Instance Court of Gegharqunik Marz decided:

The information presented in the newspaper were of factual nature;

The media outlet bears the responsibility for proving the truthfulness of the fact;

Before publishing the article the media outlet did not undertake effective measures for checking the truthfulness of information and whether or not it corresponded to the reality;

Thus the media outlet is responsible for the disseminated information.

When defining the compensation amount the court has taken into consideration that charging of monetary means as demanded by the Plaintiff can create obstacles for the smooth operation of the newspaper and endanger the newspaper’s publication, artificially limiting the dissemination of information, and therefore reduced the demanded compensation amount of 2 mln. AMD to 100 000 AMD. As for 500 000 AMD demanded for the lawyer’s fee, the court defined 100 000 AMD. At the same time the Court found that when defining the compensation amount, the court was inter alia led by the public position of the Plaintiff as a representative of authorities.

The Court of Appeal entirely rejected the complaint of the Respondent by leaving the decision of the First Instance Court into force.

The Council finds that in light of the circumstances of the present case the newspaper was the good-faith reproducer of information and thus was entitled to using the fair comment protection which is set forth in the part 6 and point 2 of part 5 of Article 1087.1 of the Civil Code. According to the first, the newspaper provided a verbatim reproduction of the text of interview with teacher Anna Torosyan, the source of information. This was confirmed as well with the evidence given by the latter as a witness in court. Anna Torosyan is a physical person, who is an “author” of information, according to the case law of the Cassation Court . Thus the mentioned person is a proper information source .

The same precedent defines as well that the legislator’s requirement about verbatim and good-faith presentation of information pursues the aim of ensuring the word for word narration of information from the disclosed source or its publication in such way that neither the overall meaning nor the information about concrete facts are changed . As already noted, Anna Torosyan confirmed in court that the journalist has provided a verbatim presentation of her statements. Moreover, during court proceedings the parties also heard the recording of the interview taken by journalist and there were no objections from this perspective. The Council notes as well that when publishing information the journalist took measures to sufficiently distinguish oneself from the author of information, so that an objective reader could clearly understand that the author of the statements is not the journalist . The afore-mentioned circumstances are convincing for the Council to conclude that the daily has conscientiously reproduced the information received from proper source, as defined in part 6 of Article 1087.1 of the Civil Code.

As to fair comment protection under point 2 of part 5 of the afore-said Article, the Council notices that first, any information with regard to the performance of the official duties by a public official, especially when this pertains to a possible case of corruption which is a wide-spread phenomenon in Armenia and which is a subject for acute concern for public, stems from a prevailing public interest and the media not only can, but also are obliged to provide public with such information. Secondly, according to the second provision of the same Article, in this particular case the journalists undertook all possible measures to find out the truthfulness and substantiality of the data, as well as presented these data in a balanced and conscientious manner. In particular, the daily has not only presented A. Torosyan’s viewpoint but also established contact with Marzpet and the Head of Information service of Marzpetaran and received necessary comments from them and presented this properly in the article as a verbatim reference. In such circumstances the Council finds that the media outlet has undertaken all measures, within reasonable scopes, to check the truthfulness of information and whether it corresponds to the reality.

The fact that the author of information, Anna Torosyan, refuted the truthfulness of statements made by herself after the article’s publication is not essential here since the requirement of fact checking by the journalist should be assessed in light of the situation existing at the moment when the relevant information was received and not with a retrospective look . In this particular case, when taking the interview, the journalist had no grounds to doubt the reliability of information author as an information source. Besides, even in those circumstances, the journalist has made efforts to check this information with another source – with Marzpet and the Information Service of Marzpetaran.

The Council expresses concern that both the First instance Court, and the Court of Appeal, did not make the afore-mentioned circumstance a subject for court examination. The courts made no reference at all to fair comment protection and limited themselves only with making an abstract conclusion that since it was found out later that the disseminated information was false, the media outlet automatically bears responsibility. Whereas the fair comment protection allows journalists even making mistakes, if she/he has acted in good-faith when disseminating information of public interest. The mentioned two circumstances did not become subject for the court’s examination.

As far as the position of the court regarding the demanded compensation is concerned, from this point of view the Council first appreciates the fact that the court has significantly reduced the amount of pecuniary damage considering the need for the media outlet’s smooth operation. However, the Council also expresses its concern with the fact that when defining the compensation amount the Court has taken into account, amongst other circumstances, the Plaintiff’s “public position as an authority representative”. In its decision the Constitutional Court has noted that “publications that address issues of high public interest and concern persons who occupy public positions or are political figures enjoy maximum protection and the Plaintiff’s afore-said public position cannot be interpreted to the detriment of the Respondent when deciding on the compensation amount” .

The information concerns an issue which is of acute public concern – alleged corruptness of a public official. As such, the journalists and media are under the special protection of the right to free expression if they have acted in good faith, in accordance with the norms of journalistic ethics.

When publishing the disputed article “Zhoghovurd” daily used proper information source and within reasonable scopes undertook all measures to check the truthfulness of information and presented information in a balanced and conscientious manner.

When carrying out a judicial examination the courts did not take into account an important principle for journalistic freedom such as fair comment protection which resulted in an incomplete court examination.

When defining the need and amount of damage compensation the courts should not have been led by the Plaintiff’s public position as a representative of a public authority. Such approach is anti-democratic.