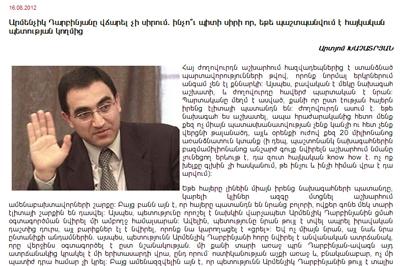 IDC opinion on the court case filed by Armen Darbinyan vs “Center for Political Studies” Ltd.

On 21 August, 2013 on the court case filed by Armen Darbinyan vs “Center for Political Studies” Ltd.

On 18.08.2012 an article entitled “Armenchik Darbinyan does not like to pay. Why would he, if he is protected by the Armenian government” was published in www.n-idea.am website run by the “Center for Political Studies” Ltd., concerning Armen Darbinyan, former Prime Minister of Armenia and Rector of Slavonic University. Armen Darbinyan applied to the General Jurisdiction Court of Nork-Marash Administrative Districts in Yerevan, noting that several statements in the article are insulting and defamatory and demanded to oblige the Respondent to publically apologize and to pay compensation in the amount of 1 mln. AMD for insult and 2 mln. AMD for defamation, as well as 1 mln. AMD for lawyer fee and 84 000 AMD for the paid state duty fee. The Plaintiff has considered the following statements as insulting:

And today Armenchik Darbinyan, this Napoleon-like phenomenon of new Armenian reality, got annoyed by Suzan Simonyan’s article. In his Facebook page this wimp wrote…”.  Pay attention how this worthless one, this petty wimp, who seizes the bread of our children (by the way, all Armenian “non-elite” children are under threat), wimp Darbinyan has succeeded in taking away the bread of my child, that of Serobyan’s child and other children but this does not mean he will be surfeited…”.  “…At least for the fact that Vazgen has been regularly (almost every day) giving educational lessons for armenchik-like freaks…”

The Plaintiff considers the following statements as defamatory:

The government allowed him to live out of the legal field, presented him with other gifts which he could “snatch out”;  The government allows Armenchik Darbinyan to enter the pocket of the common citizens of Armenia unpunished and to cause them a material damage;  So, this magnificent prime-minister was feeding himself with stolen meat and meat products (that is for free) whole his life since his dad was robbing the meat factory in the position of director and before that Armenchik Darbinyan would eat wastes;  Wimp Darbinyan has so far succeeded in snatching the bread of my child and that of the children of Serobyan and others;  …Vazgen called Armenchik Darbinyan (when he was prime minister) to his office and together with the then finance minister Sandoyan, cursed him in a big way and beat with almost to death”.

During court investigation the Respondent presented the afore-mentioned statements as value-judgments which are not subject to proof and concluded with this regard that he did not have an intension to insult and that the obligation to prove the truthfulness of these statements should be lifted from him.

The first instance court satisfied the claim partially. The court decided that the aforementioned statements are insulting and defamatory but it significantly reduced the compensation amount and defined 200 000 AMD for insult and 200 000 AMD for defamation; 150 000 AMD for lawyer fee and 8 000 AMD for state duty. The court obliged the respondent to also publically apologize.

The Court of Appeal has particularly addressed the Respondent’s arguments about the afore-mentioned statements as value judgments and made the following conclusions:

“In order to find out whether the disputed information is a value judgment or not it is necessary to find out the meaning of the word “judgment”. In logics the judgment is a type of thinking which is a combination of concepts one of which (the subject) is determined and disclosed through the other (the predicate). In philology a conclusion, assumption, interpretation, clarification made based on opinions, advice, convictions shall be deemed as judgment. In this particular case from the point of view of logics, the predicate is missing and only the subject is in place (… “the government allows Armenchik Darbinyan to enter the pocket of the common citizens of Armenia unpunished and to cause them a material damage”; “… So, this magnificent prime-minister was feeding himself with stolen meat and meat products (that is for free) whole his life since his dad was robing the meat factory in the position of director and before that Armenchik Darbinyan would eat wastes”; etc. From philological point of view advices and convictions and the assumptions, comments and conclusions made based on these are missing. What is in place is only a claim, statement and presentation about factual data. In these circumstances the above-mentioned argument of the person having submitted an application to the Court of Appeal is not substantiated”.

Hence, both the First Instance Court and the Court of Appeals have deemed all statements as statements about facts.

The Council welcomes the interpretation of the term “judgment” by court since it finds that a practice has developed when parties of a court case often attempt presenting common statements about a fact as value-judgments . Moreover sometimes the courts themselves present a statement about fact, including an expressed opinion, as a value judgment.  With this regard the Council finds that it was long necessary to provide legal interpretation of the term “value-judgment” in the court practice.

The Council finds that the problem partially lies with the legal shortcoming. Article 1087.1 of the civil code does not provide an independent definition of “value-judgment”. The term “insult” is defined under part 2 of the mentioned Article which mentions only about public “statement” which can equally apply both to a statement of fact and to value-judgment, without distinguishing these two concepts different from each other. Although courts regularly and consistently address these concepts in their decisions, however because of the lack of legal regulation there are situations when court parties perceive statement of fact as a value-judgment or just like in this case, value judgment is perceived as a statement of fact. As a result, the Respondent of the case was requested to prove the truthfulness of value judgments as well, which are not subject to proof . The Council finds that if the disputed statement is a person’s subjective assessment about another person, not based on facts, then such statement should be examined in the context of insult as a value-judgment and not under defamation, as a statement of fact.