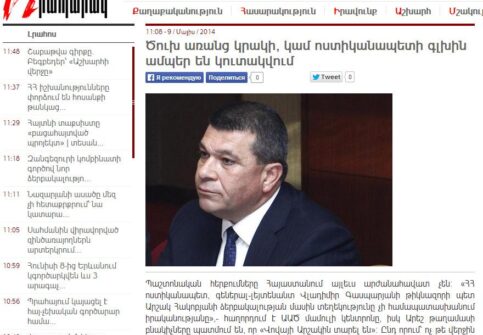 On 29 March, 2015 the Information Disputes Council released its opinion On the verdict of the General Jurisdiction Court of Kentron and Nork-Marash Administrative Districts in Yerevan, on the case No. ԵԿԴ/0032/08/14, obliging “Hraparak” daily to disclose its information source.

An article entitled “Smoke without fire or clouds accumulated above the head of Police Chief”, authored by Suzan Simonyan, was published in 09.05.2014 issue of “Hraparak” newspaper. Another article entitled “Shirak Police Chief attacks famous wrestler: the wrestler considers to quit performing under the Armenian flag” was published in another information portal – www.ilur.am. In both articles, by using undisclosed sources, the authors informed that an incident happened between the Shirak Chief of Police and famous wrestler Arthur Alexanyan, during which the Police Chief exhorted violence againt the wrestler. Other media as well published articles, commentaries and news on the same incident.

On 30.05.2014, the Special Investigative Committee of the RA filed a criminal case, based on part 2 of Article 309 of the Criminal Code of Armenia (abuse of official powers, accompanied with use of violence, guns or special means). Within the framework of the criminal case, the investigator applied to court requesting that the court makes a decision obliging “Hraparak” newspaper to disclose its information sources. The representatives of “Hraparak” newspaper appealed the court’s decision. On 22.09.2014 the Court of Appeals rejected the appeal. The representatives of the newspaper appealed that decision with the Cassation Court. On 28.11.2014 the Cassation Court returned the appeal, by recognizing the complaint as inacceptable. After some time, the investigator from the Special Investigative Committee requested “Hraparak” daily in writing to disclose its journalistic sources. The newspaper’s editorial staff informed that they do not possess data about the source, thereby not providing the requested information. The investigative body did not undertake any further steps towards executing the court’s decision. Till date the court’s decision remains unimplemented.

The dissemination of information without mentioning its source is part of everyone’s right to freely seek, receive and impart information, which, in its turn, arises the responsibility of the journalist and/or media in terms of maintaining the secrecy of information sources. The European Court of Human Rights has defined the contents of these legal relations, inter alia, in the case of Gudwin vs the United Kingdom , noting that Article 10 of the European Convention on Human Rights includes as well the journalists’ rights not to disclose information sources:

“Protection of journalistic sources of information is one of the fundamental conditions of media freedom”.

The necessity for not disclosing information sources is linked with several important circumstances. First, there are cases in journalistic activity when the person providing information agrees to speak only upon the condition of not being disclosed. In such cases the journalist should of course find out the reason for the source’s remaining secret and only then, promise not to disclose it. Secondly, in their professional work journalists often use information sources who wish to remain secret as they signal about illegalities in their respective institutions. The use of leaked information thus can be important for the effectiveness of the journalist’s work, if the journalist guarantees the secrecy of source. Furthermore, considering that the journalists and media, because of the public nature of their work, can get easily involved in the activity of the police or judiciary, the protection of the secrecy of sources and guarantees for such protection become highly important.

According to the Court’s position expressed in Goodwin case:

“Without such protection, sources may be deterred from assisting the press in informing the public on matters of public interest.  As a result the vital public-watchdog role of the press may be undermined and the ability of the press to provide accurate and reliable information may be adversely affected. Considering the importance of the protection of journalistic sources for media freedom in a democratic society and the dangerous effect that an order for disclosure may have on media freedom, it follows that an order for source disclosure cannot be compatible with Article 10 of the Convention unless it is justified with a more important public interest”.

The notion of “public interest” has been defined in the CoE Committee of Ministers’ Recommendation No. 2000(7), 08.03.2004, “On the right of journalists not to disclose their sources of information”, according to which disclosure of journalistic sources can be considered necessary if it has been convincingly proven that:

– an overriding requirement of the need for disclosure is proved,

– the circumstances are of a sufficiently vital  and serious nature,

– the necessity of the disclosure is identified as responding to a pressing social need, and

– member states enjoy a certain margin of appreciation in assessing this need, but this margin goes hand in hand with the supervision by the European Court of Human Rights.

In the Explanatory Memorandum of the same Recommendation, the CoE CM explains the concept “overweighing public interest”, noting that it implies:

Hence, the demand for the disclosure of journalistic sources can be justified with regard to four types of grave crimes: murder, causing heavy body injuries, crimes directed at national security; and organised crimes.

The concept “overweighing public interest” has been more conceptually explained under point 36 of the same document, according to which, given the importance of freedom of expression and freedom of the media for any democratic society and every individual, and taking into account the potentially chilling effect a source disclosure may have on the readiness of future sources to provide information to journalists, only “exceptional cases” where a “vital personal or public interest is at stake” might justify or be proportional to the disclosure of a source. The above-mentioned implies that disclosure of sources should not be a rule or practice applicable versus any kind of crime but only a very strict exception related to crimes, prevention or disclosure of which stems from vital public interest. The prevention or conducting criminal prosecution of the four types of crimes mentioned above is indeed a vital public need.

The Council finds that contrary to aforesaid, in the materials of the case in question there are no evidences that the demand to “Hraparak” daily was made with regard to a case, disclosure of which would present vital public necessity. In such cases the media’s right not to disclose information should prevail. Thus the judicial act demanding the newspaper to disclose its source is a non-legitimate intervention into the media outlet’s right to disseminate information and ideas.