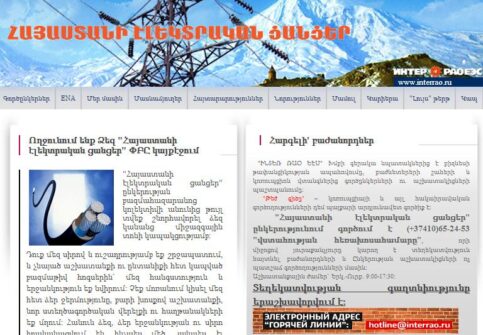 On 30 August, 2015 the Information Disputes Council released its opinion on the ongoing legal case ԵԱՔԴ/1548/02/12 about the concept of “public statement”. The RA Court of Appeal for Civil Cases has provided an interpretation about the concept of “public statement” stipulated by Article 1087.1 of the RA Civil Code, re the ongoing legal case ԵԱՔԴ/1548/02/12, on which the Council considers it necessary to provide its opinion.

Hrachya Harutyunyan, the defendant in the specified case, held the position of Deputy Head of Security and Oversight of “Electric Networks of Armenia” CJSC. In the course of his working activity, Harutyunyan disclosed many facts on huge abuses by different employees of the Company, about which he decided to inform the Company’s management. With this purpose he sent his analysis, written documents about the abuses to the Company’s Board of Directors in the electronic from through hotline of the Company’s website in March of 2012. The following statement was published on the “Fight against Corruption” section։

“Persons who are aware of actions which caused or may cause material damage to or harm “INTER RAO ELS” CJ Company may notify about such information through the hotline to the specified electronic addresses. Applications of these persons will be operatively forwarded to the Block of Internal Audit, Consulting and Risk Management which is under direct supervision of the Board of Directors and is independent from the Management. Independent inspection of the described facts will be conducted; moreover, they guarantee confidentiality of the information received”.

Several months later the Head of Security and Oversight of the Company called H. Harutyunyan and suggested to meet. During the meeting, which was a face-to-face meeting, the Security Head showed the printed text and documents which he had with him and asked whether he was the person who sent them through the Company’s hotline and received H. Harutyunyan’s positive answer to his question. The Security Head offered him to sign the documents and the statement as affirmation that the author of the statement was H. Harutyunyan, and the latter agreed to sign.

After some time, another employee of the Company filed a lawsuit against H. Harutyunyan on the ground of Article 1087.1 of the RA Civil Code accusing him in disseminating insulting and defamatory statements about him. During the litigation H. Harutyunyan insisted that the application should be rejected since he did not make any public statement. The subject matter statements and texts were sent non- publicly to the Company through the internet and by ensuring all confidentiality conditions, as well as in the meeting with the Company’s official, during which again there was not any third party present and the meeting was confidential, in non-public circumstances.

The concept of “public statement” stipulated by Article 1087.1 of the RA Civil Code is one of preconditions of application of this Article, if not the most important precondition. In deciding the issue of applicability of this Article for any case, first of all it is necessary to find out whether the disputable statement was made in public or not. Taking into account its importance, the RA Constitutional Court interpreted this concept in its decision No. ՍԴՈ-997 by determining that “Article 1087.1 of the Civil Code is called to overcome consequences of groundless defamation in the presence of at least a third person” .That is to say, according to the Constitutional Court, a statement should be made at least in the presence of օne third  person in all cases.

The RA Court of Cassation also interpreted this concept. In particular, in its decision made re ԵԿԴ/2293/02/10 civil case the latter defined that ‘Statements made in the presence of at least one third person shall be considered as public” . That is to say, the Court of Cassation emphasized the circumstance of making a statement n in the presence of a third person as the necessary condition of publicity. This idea was underlined once more in the paragraph following the same paragraph where the Court of Cassation, in explaining the modes of making public statements, emphasized a mode of making a statement when at least one person is observer to the words said. That is to say, if the precondition for publicity is that at least one person is an observer when the words are said, it must be done exclusively at the moment when the statement was made, rather than at other time in future. The Court of Cassation used the phrase “in the presence of” in its precedential decision for this purpose.

Opposite to the specified regulations, with regard to H. Harutyunyan case, the Court of Appeal for Civil Cases found that the concept of “a third person” per se lead to “presenting data to person other than the “injured” and “defamer”. Here the word “per se” causes confusion: it seems that even if the statement is made from one person to a second person in the conditions of confidentially and without the presence of a third person, if the same statement is made or communicated to any third person in future, but again confidentially, it is already a sufficient circumstance for the first statement together with the second statement to be deemed as public, irrespective of the circumstance that neither during the first expression nor the second expression a third party was not present and did not become “the observer of those statement.