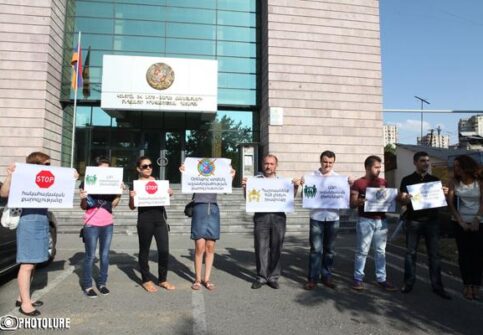 On May 7, 2015 the Information Disputes Council released its opinion on the case of “New Generation” Humanitarian Non-Governmental Organization versus “Chairman of “Iravunk Media” Ltd Editorial Board Hayk Babukhanyan and journalist Ilona Azaryan.

An article entitled “When the grant-sucking defenders of homosexuals receive state support” was published in the issue No. 62 (2410) of “Iravunk” newspaper (June 6-9, 2014), where the journalist presented an interview with the Head of Youth Policy Department of the Ministry of Sports and Youth Issues. Before the interview text, the journalist also included an introduction which read as follows:

The article was accompanied by a photo, which was centrally located within the article where a group of young people were holding the US flag and a poster with “No Hate Speech” written on it. The bottom part of the picture has the following caption:

“21 September 2013: “New Generation” NGO actually stains the Independence Day in Gyumri, by holding a pacifistic event. The demonstrators mostly hold posters saying “No hate speech”. This slogan is number one amongst the slogans of lobbyists for the rights of homosexuals”.

In July 2014, “New Generation” NGO applied to Kentron and Nork-Marash General Jurisdiction Court in Yerevan versus the Chairman of “Iravunk Media” Ltd Editorial Board Hayk Babukhanyan and journalist Ilona Azaryan. The organization finds that the article damages the business reputation of the organization, under Article 1087.1 of the Civil Code and requested the court to oblige the media outlet to apologize to the organization under section “Refutation” in “Iravunk” newspaper; to charge the respondent 3 000 000 AMD as a legitimate compensation and to publish the legal act. The court examination is underway in the above-mentioned court.

Although journalistic freedom includes possibility for disseminating sharp, critical, shocking and disturbing and even provoking information about issues of high public interest, such freedom would not amount to a violation of free speech if the journalist at the same time acts in good-faith and provides reliable and accurate information, based on the norms of journalistic ethics (Shabanov and Tren versus Russia, No. 5433/02, 14/12/2006, ECHR, § 40). In this particular case the journalist has described the organization with the expression “defending anti-moral human scraps”. The facts show that such description has been given exclusively for the reason that the origination calls on to respect human rights, not to turn to homophobia and to put an end to hate speech, something being practiced by all civilized mankind. In this particular case, any reasonable reader can arrive to the opposite conclusion, that the journalist refuses respect to human rights, denies the universal ban of hate speech and homophobia. No other conclusion is possible when reading the afore-mentioned text. Such means of providing information raises concerns, since it appears that even if the journalist did not have the intention, he/she nevertheless becomes disseminator of hate speech, promotes non-tolerance and extremism. Such method of providing information is non-acceptable, legally incorrect and is far from journalistic ethics. All this should be evaluated also in light of the fact that the journalist has a public function (by providing public with mass information) and in these circumstances such journalistic behavior also contains danger for the public.

The facts also show that the journalist has a piori identified protection of human rights and ban to hate speech with the protection of homosexuals, without offering any factual basis for such reasoning or presenting reasonable conclusions. It is unclear as well as to why the journalist concluded that a universal value like “no to hate speech” is the “number one” slogan for the protection of homosexuals, that this slogan preaches pacifism, which, in its turn stains the Independence Day of Armenia. No explanation, comment, factual basis or source (scientific, legal, public, etc.) has been presented for such conclusion, which would otherwise evidence that the journalist has studied the subject under discussion, used objective data and based on these, prepared journalistic materials and disseminated to the public. Such way of providing information is no more than an example of irresponsible journalism.

The Council finds that the article includes statements and appeals which are demonstrations of extremism and hate speech. However the court has not included this circumstance under its examination, although plaintiffs clearly raised this issue in their application.

It is undoubtable that with this article the author implemented their right to free expression. Nevertheless, no regulation of protection of free speech covers hate speech. It is necessary to differentiate between shocking, disturbing and even provoking critical speech from the kind of speech which is demonstration of extremism and as such inculcates and advocates hate. The first one is protected with free speech, the second one is not. Hate speech is excluded by civilized nations without any exception. This position is also enshrined under international law, which gradually recognizes hate speech as a customary norm of international law.

As far as the European Convention on Human Rights is concerned, it bans hate speech on two legal grounds: under Article 17 of the Convention (forbidding abuse of rights), according to which hate speech denies the values of the Convention; and under Article 10 or 11, part 2 (national security, public security, others’ rights, etc.). A statement like “zero tolerance”, as well as the entire context of the article, which appeals demonstrating intolerance towards specific persons, including their complete segregation from public is incompatible with “democratic values”, “rule of law” and “civil solidarity” ideas, which are enshrined in the preamble of the Constitution of Armenia.

Especially problematic is the fact that in this case the media outlet has not just provided a platform for disseminating hate speech but was the author of such speech. More problematic is that the journalist is a person responsible for developing editorial policy of the media outlet, through which she not only assumes broader rights but also responsibilities in terms of combining their activities with the Constitution, laws and journalistic behavior norms.