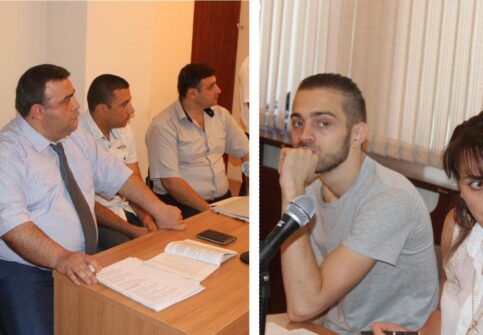 On Juy 30, 2015 the Information Disputes Council released its opinion  on the case of the Police and its representatives vs Vilen Gayfejyan.

The General Jurisdiction Court of Arabkir and Kanaker-Zeytun Administrative Districts of Yerevan has under its proceedings the civic case filed by the RA Police, as well as co-plaintiffs Hovhannes Kocharyan, Head of Legal Department, Police Officers Arthur Madafyan and Sergey Zakaryan. The application has been submitted versus citizen Vilen Gayfejyan, within the framework of the following factual circumstances.

On 24 May 2015, a video material entitled “11 SOS-Գ/7” was published in www.blog.1in.am, whose original source, with the reference of http://blog.1in.am/140998.html, was uploaded on www.youtube.com. In this video, the program host Vilen Gayfejyan commented on the actions taken by the police who were in service in front of the Office of the President of the Republic of Armenia, when they, by using force, were removing a group of demonstrators from the entrance of the Presidential Office. The plaintiffs find that in this video the program host used statements which damaged the honour and dignity of the plaintiffs. In particular the introductory remarks of the host start with the following statement: “Dear fellow citizens, the first edition of the program “G” and just “yot” (note by translator: the combination of the letters in brackets is a curse in Armenian language) is on the air” and at the 28th second of the video, by showing shoulder-strap with his right hand, the host said: “We, the “G-s” and just “yots” are the defenders of RA citizens, their servants and friends” . At the 44th second of the video the host makes the following statement “Recently there was a phone call to our fence-licking section”, which is followed by the view of iron bars in front of the Presidential Office and police officers who are in service there. At 3:00 minute of the video a reference to 02 news program was made where immediately after the concluding remarks of the host and showing the action of the two plaintiffs, the respondent used the word “bustards”, at 3:10 minute.

The plaintiffs, among other arguments, find, that the State can also act as a subject to legal-civic relations and solicit legal protection when its good reputation (according to the Constitution of the RA) or business reputation (according to the Civil Code of the RA) has been damaged. In addition, the plaintiffs find that the insulting statements in the video were collectively directed at the RA Police and that with its actions the Respondent pursued the goal of humiliating the good reputation of the RA Police. In such consequences the plaintiffs find that the Republic of Armenia, represented by the Police, has the right to appear as plaintiff based on Article 1087.1 of the Civil Code and solicit legal protection from statements damaging the honour and dignity of the Police.

In the present case the Republic of Armenia and several officials appear as plaintiffs. In this perspective, the court case differs from the rest of the cases, on which the Council has provided its expert opinion. The Council finds that state bodies and public officials should abstain from appearing as plaintiffs in cases involving insult and defamation. In its decision No. ՍԴՈ-997, the RA Constitutional Court has provided an exhaustive answer to this issue, by disclosing the constitutional-legal contents of all provisions under Article 1087.1 of the Civil Code, by noting that in the context of Article 1087.1 “a person’s honour, dignity or business reputation is protected from the damaging actions of the others exclusively through civil-legal regulation, and the word “person” does not refer to public bodies as legal persons” .

With such position the CC has excluded the non-intervention of state bodies in cases involving insult and defamation. Moreover, the CC considers the principle of non-intervention as an important guarantee  for exercising everyone’s right to free expression, including holding opinions and disseminating information and ideas.

The principle of non-intervention by state bodies is enshrined in the law implementation practice of several states and covers both state and elected bodies, state enterprises and even political parties. Upholding this principle is demonstration of political will showing that the authorities acknowledge the importance of open criticism concerning public bodies in a democratic society, the scope of limitations of the right to reputation of these bodies and its public nature. No less important is also the fact that public bodies have broad protection resources, something that is not affordable to ordinary citizens . In this perspective, it is alarming that when seeking protection from insult and defemation, the public bodies use public resources in order to limit a right (free flow of information), which also has public significance.

Summarizing the above, the Council finds that the Republic of Armenia, in this case represented by the Police of Armenia cannot act as plaintiffs in the case. As for other plaintiffs, they can appear as physical persons and when exercising their legal protection rights, should not use public resources.