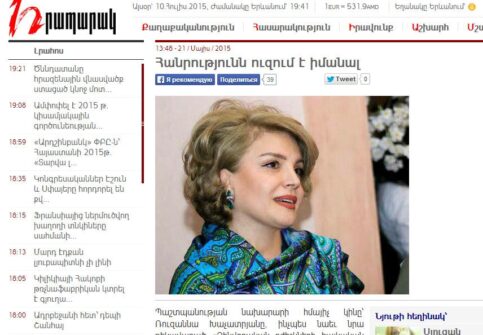 On 30 June, 2015 the Information Disputes Council released its opinion on the case filed by Ruzanna Khachatryan versus “Hraparak” daily.

“Some media addressed in details the relationship between the Minister and his wife, told about their “light” acquaintance and long extramarital connection, remembered and disseminated the story about how a woman, who was not famous back at the time, drove her boy-friend’s car and crashed it, becoming the reason of the latter one’s death. Let’s note this story has been passed from one to another long time ago and years before, the journalists were writing about this criminal case, as well as about its investigation and court trial concerning it, but no one was interested in who was driving the car. Only now, when the prospects for the Minister of Defence to become President turned very visible, dark stories came into surface… After all, his personal life has been touched upon which is inviolable, on the other hand this is dirty linen and it is shameful to wash it in front of the public”.

The article was published along with the photo of Ruzanna Khachatryan, the wife of the Armenian Minister of Defence. She finds that the article is inclusive of defamatory and insulting statements about her. According to her lawyer Karen Mezhlumyan, the media outlet has not responded to Ruzanna Khachatryan’s request to publish refutation. Karen Mezhlumyan has applied to the Information Disputes Council, requesting to provide expert opinion  about publication of a material without seeking clarification of facts with Ruzanna Khachatryan, not reacting to refutation request, as well as legal regulations and professional ethical norms involved in this field.

Taking into account that the court hearing on the present case has not started yet and that the case has high public resonance, the Council abstains from evaluating the facts and instead prefers to express opinion about the scopes of information and criticism concerning the personal life of public figures, public officials.

The dispute pertains to journalistic freedom in providing information on facts concerning public officials and their family members that are of public interest, secondly, the right to respect the privacy of everyone’s personal and family life, thirdly, the public right to receive information about cases involving public significance and interest. In terms of the last one, the responsibility to provide such information lies with media and journalists.

It is undoubtable that publishing any information about personal and family life is an intervention into the right to privacy of personal life. Nevertheless, the intervention can be legally proportionate if under present circumstances it was “necessary”. In order to determine whether the intervention was based on sufficient grounds, which make it “necessary”, one has to take into account whether it had public significance (Bladet Tromso and Stensaas v Norway, No. 21980/93, 20/05/1999, p. 62) . So, the scope of a public official’s personal life, including cases and events related to their family members, can also become subject for journalistic freedom to an extent that they are related to a person’s public functions, decisions and actions of public significance. In this perspective it is particularly important if the information about any episode of a personal life was directed at generating open public debate about any issue, and contributed to public discussions on matters, phenomena, which are of public interest.

Nevertheless, even the above-mentioned freedom is subject to limitations. According to Armenia’s Constitutional Court, Article 10 of the European Convention on Human Rights does not guarantee an entirely unlimited freedom of expression even towards media publications, which pertain to serious public interest matters. Part 2 of the Convention’s Article 10 implies “obligations and responsibilities, which are applicable also towards media and which mean that the protection offered to the media in terms of imparting information of common interest is subject to the precondition that the journalist will act in good faith, to provide accurate and reliable information, in line with journalistic ethics”.

This precedent provision has a wide application in practice, especially in the self-regulatory documents of journalistic organizations. Section 1 of the “Code of Journalistic Ethics” of the Media Ethics Observatory run by the Yerevan Press Club entirely concerns the principles of accuracy and impartiality of information. Thus the good-faith journalism is a universal precondition and the formal availability of the protection of journalistic freedom (statement of facts, value judgment, exercising of a right to remain anonymous) cannot overweigh this universal pre-condition. The latest verdict of the Grand Chamber of the European Court of Human Rights on Delfi vs Estonia case also confirms this.

Taking into account the above-said, the Council finds that the dissemination of information about an episode concerning personal, family life of a public figure  cannot put the legality of such information itself into question. A lot will depend on to what extent during court hearing the media outset will be able to justify that the journalist acted in good-faith, that the information was not directed at satisfying the personal interests of a narrow group of readers, but contributed to the discussion of an issue which was of larger public interest.