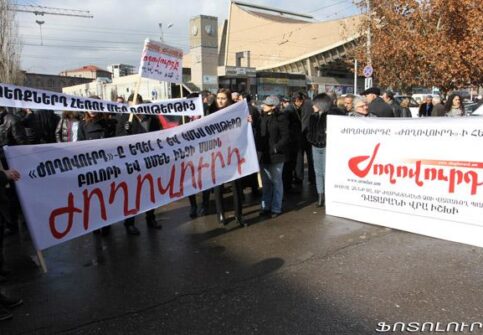 On May 21, 2013 the Information Disputes Council released its opinion on the court case filed by “Zhoghovurd” Newspaper Ltd. and journalist Sona Grigoryan vs. Khachik Khachatryan.

1. Circumstances of the case

On 11 December 2010 “Zhoghovurd” newspaper published information according to which the State Inspection for Food Safety of the Ministry of Agriculture fined the Head of “Yerevan Poultry Factory” KhachikKhachatryanfor selling outdated eggs of the factory in the Armenian market. Sona Grigoryan, plaintiff of the case and correspondent of the newspaper had a phone conversation with Khachatryan during which the latter one insulted the journalist by making a non-decent statement in her address.

The journalist and the newspaper’s editorial house applied to the general jurisdiction court of Arabkir and Kanaker-Zeytun administrative districts, requesting apology for the insulting statements discrediting honour and dignity. During court investigation the respondent acknowledged the fact that he made an insulting statement about the journalist but requested the court to close the civil case since the disputed statement had not been made in public but only during private phone conversation, whereas Article 1087.1 of the RoA Civil Code based on which plaintiffs went to court, applied only to statements that have been made in public.

The plaintiffs, on the contrary, found it essential that when making insulting statements the respondent recognized that his thoughts expressed on the phone would be published, as well as that he was striving to publicize them. The mentioned circumstances, according to the plaintiffs, served as basis for considering the speech made at a bilateral phone conversation as public.

On 29 April 2013 the court entirely rejected the application, by deciding that the statement had not been made in public, while the Article 1087.1 of the Civil Code is applicable only to public statements.

Ever since insult and defamation have been decriminalized and transferred to the civil law domain, several opinions have been voiced by various groups of the society that it is necessary to protect a person’s honour and dignity not only from public statements but also from privately made statements that are insulting and defamatory and in this perspective Article 1087.1 of the Civil Code does not provide with a full possibility for legal protection. The Human Rights Defender of the RA expressed concern with this regard in his application to the Constitutional Court from 13 October 2011, noting that in such conditions the people are deprived of “the possibility to protect their honour, dignity and business reputation in cases when the statement in question has not been made publicly”. In response to the concern of the HRD mentioned above, the Constitutional Court in its Decision No. ՍԴՈ-997 expressed an opinion, according to which “the mentioned issue is not a question of the relevant Article of the Code but a shortcoming in the legal regulation and in order to remedy it, the National Assembly, within its legal authority, should make the legal regulation of the protection from non-public insult, a subject for separate discussion”.  A considerable amount of time having been passed since then, the NA has still not implemented the Constitutional Court’s decision.

There is a legal loophole which deprives citizens, including journalists, of a possibility for legal protection. This court dispute is the second one where a journalist, having sufficient evidence that an insulting statement has been made about him/her, is deprived of any possibility for legal protection in order to protect one’s dignity . Such situation is not acceptable in democratic society.

A legal shortcoming can also raise a question of anti-constitutionality. There is legal position of the Constitutional Court, which, in its decision noՍԴՈ-914, expressed the following opinion: “a legal loophole can become subject to the Constitutional Court’s examination only in cases when there are no guarantees in the legislation to fulfill this shortcoming…or when the legal loophole does not provide the possibility for exercising this or that right”. We are not aware of any legal norm based on which citizens can solicit legal protection from insulting and defamatory statements that were not made publicly.

Calls on the National Assembly to implement Decision No. ՍԴՈ-997 of the Constitutional Court and within its legal authority, address the legal regulation of the protection from non-public insult.  Taking into account the non-activity of the National Assembly, in case “Zhoghovurd” daily’s editorial house Ltd appeals the court’s decision in a higher court, calls on the Court of Appeal to suspend the case and apply to the Constitutional Court, questioning the constitutionality of the paragraph “2.1 Procedure and conditions for compensating the damage caused to honour, dignity and business reputation” of the Civil Code, with regard to this provision not envisaging any means for protecting individuals from insulting statements that have not been made publicly.